Vintage Purses - Why I Love Them

So those of you who know me know I collect three things - Fenton glass slippers, West Virginia Glass Cocktail and Juice sets and vintage purses. I have a pension for Whiting and Davis metal purses, but I won't pass up a sweet wooden purse with Lucite handles, Lucite purses, beaded beauties and metal purses that aren't Whiting and Davis.

I hit the mother load this weekend at an auction and splurged on myself a little when I found some very beautiful, very unique vintage purses in a lot. Luckily I only had one competitive bidder! The auction was the estate of a gentleman who sold antiques and he had prices on several of the purses, so it was interesting to see how much he had wanted for them compared to how much I paid! The four purses I purchased cost $120, the two purses he had marked totaled $280, so with a rough guess I'd say that I bought around $550 in purses for my $120, not shabby at all! I've shopped enough antique malls and Ebay to know when I have a deal on these things! Most of the purses I own retail from anywhere around $50 - $200 per purse depending on the quality and maker.

I feel like showing off some of my collection, so I'll add photos and put rough retail prices on them just for a reference in case anyone is interested in starting collections of their own! 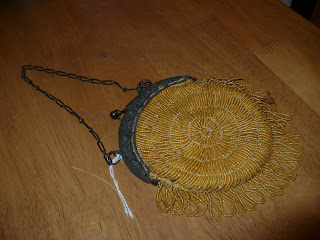 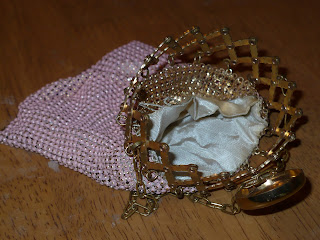 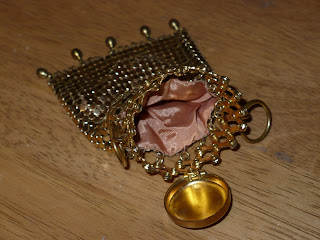 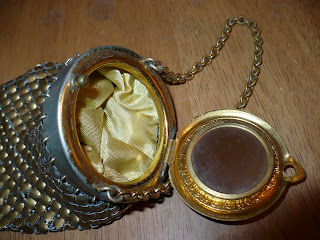 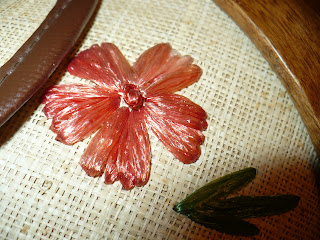 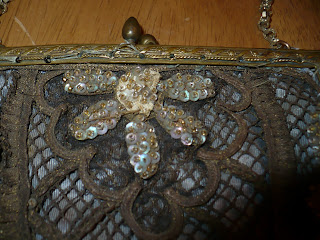 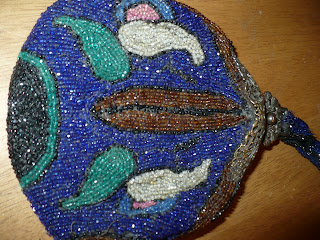 Earlier I posted about the four items I had up on Ebay, well they all went up for the first auction and not a single one of them sold... :( So I ended up relisting all four of them, hoping that the next time around I'd get some takers. Well I've officially sold one item on Ebay now and lost a couple bucks in the process...

See when you first start to sell things on Ebay they tell you the best way to sell something is to start it out at 99 cents and let folks bid it up. In fact they incentiveize you to do this by charging you if you set a starting bid at higher than 99 cents. So as a first timer I went ahead and posted three really nice glassware items, thinking that because of the quality of them they'd surely get bids. I was wrong.

I ended up selling my German cut crystal bowl, complete with the manufacturer's label for 99 cents... I'm lucky in the fact that I had bought it at an auction for $2, but it retails for anywhere from $25-60 per piece. So now I'm out the $1.01 more that I had paid for it and about $.50 for my Ebay posting, not to count the cost of the other Ebay items I ended up not selling. Oh and the shipping, I had estimated the item would weigh about 2lbs and it ended up weight 2.29lbs, so the buyer paid me $7.05 and the actual postage cost me $7.50, so another $.45.

So far it's Ebay (the company) up $3 and Mandy down $2. While it may not be a lot of money, it's still disheartening.

Lesson learned - set prices for items on Ebay, even if it costs more up front you won't be completely hosed later...
Posted by Unknown at 9:38 PM No comments:

While at an auction the other day I saw a stack of old "magazines" which were more like books or booklets and I decided they looked just too unique to pass up. What I didn't realize was that the when I bid, it was for the entire stack of magazines. So I got the three copies of the Monocle, a political satire magazine that had originally caught my eye, but the biggest surprise from the stack was when I got home and went through the other three magazines that were in the pile. Two were from the Illinois Historical Society and the third, was probably the best surprise I could have ever found - an edition of Successful Farming's "How to Save Time, Save Money and Make Profits in Farming and Homemaking."

This booklet was a collection of tips submitted by Successful Farming readers from 1931-1933 and then was published in either late 1933 or early 1934. At the time SF paid folks $2 for each tip that they published and were proud to have given $1,000 to their readers for their submissions.

Tips from the booklet include:

How to Clean Buckets - When cleaning buckets that have had lard in them, warm the bucket and rub with cornmeal or bran. Then the bucket will be much more easily washed.

Relieves Gas - When one of our cows gets bloated, we tie a rope thru her mouth like a bridle. If the rope is first soaked in salt water, she will chew it and thus greatly relieve the gas pressure.


How to Keep Flies Away - To keep flies off the door screens, saturate a rag with coal oil and rub it over the screens. This will keep a lot of flies out of the house.

A Child's Surprise - Tiny gifts wrapped in waxed paper, and concealed in popcorn balls creates fun and surprise. Insert a loop of gilt or silver cord in the balls and slip over the branches of the Christmas tree.
Posted by Unknown at 1:00 PM No comments:

The Most Awesome Sewing Table Ever! 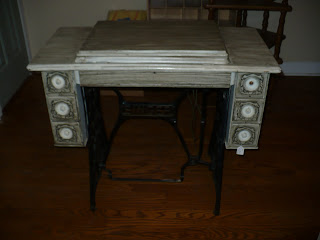 On a weekend that we didn't feel like hitting up estate sales, Chad and I went on a visit to thrift stores - mainly hitting as many Goodwill locations as possible in a day! Well, maybe not that extreme :) We ventured into the Goodwill on Forest Park Parkway and after wondering through the glassware and finding some pretty cool Halloween decorations we headed to the furniture department. That's where I fell in love with this gorgeous Singer sewing machine table with an updated sewing machine from New Home. 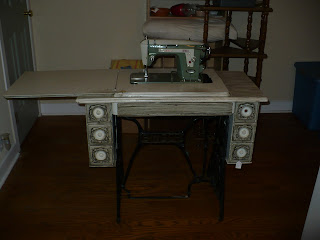 It was obvious that the table itself had been painted at some point, but it made the table very shabby chic and the wrought iron base was in great condition - it even had all of it's little wheels in place! But the kicker that really sold me on the table was all the detail in the drawers and the inlay that was on the sides of the table. I'd seen several Singer tables in my estate sale, antiquing and thrifting adventures, but never had I seen a table that had the cutouts in the drawers and was just in such great condition.

I decided I had to have it. Chad wasn't so sure it was something I truly needed, but I couldn't walk away. So I paid them the $75 they wanted for the table and we lugged the heavy thing and forced it into the back seat of my car. 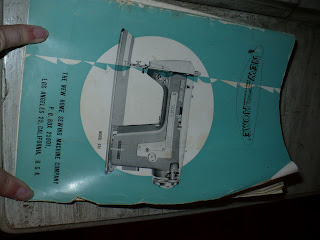 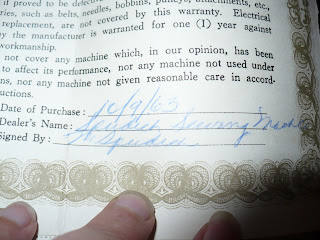 After getting it home I did a little more exploring, only to discover that most of the drawers actually had items in them for sewing, old bobbins and needles and the kicker - the original manual for the New Home sewing machine. As I looked through the manual I discovered that the previous owner had filled in the lifetime warrenty and she had dated it - October of 1963! My mom will hate this, since the sewing machine is just a year older than her, but it's pretty awesome to find a sewing machine from the 60s. To top that off, she left the sales receipt in the manual as well, so I know she spent $189 on the sewing machine itself in 1963, which wasn't chump change. This table really meant something to her when you see all the work she put into it. 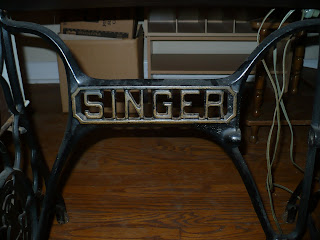 I took it to the flea market my first time out and it got a lot of attention, but no one wanted to pay the $125 for it that I was asking for. My thought is if I don't sell it I will gladly keep it in my house, I think it's just beautiful. In fact I'll likely kick myself if I do sell it, because I'm sure I'll never find another table like it... 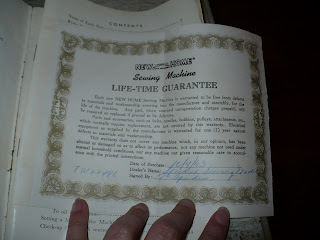 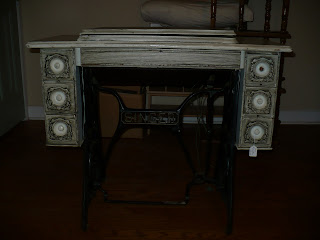 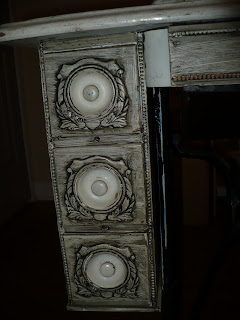 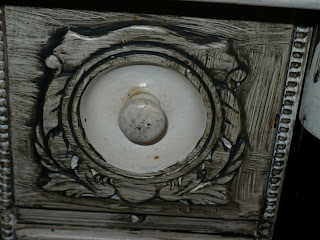 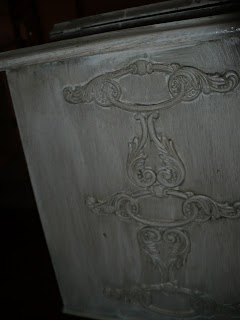 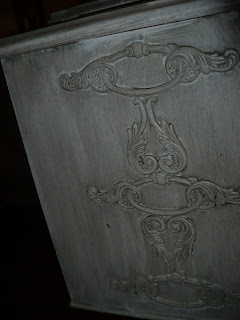 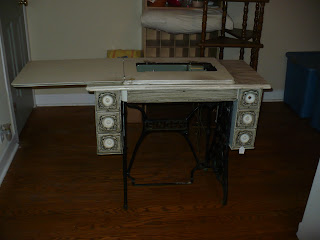 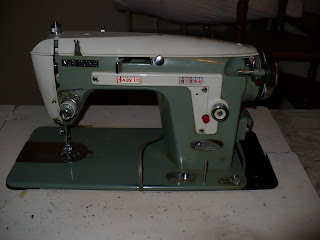 Posted by Unknown at 1:00 PM No comments:

Find Me on Ebay

Find an appraiser at GemGuide.com